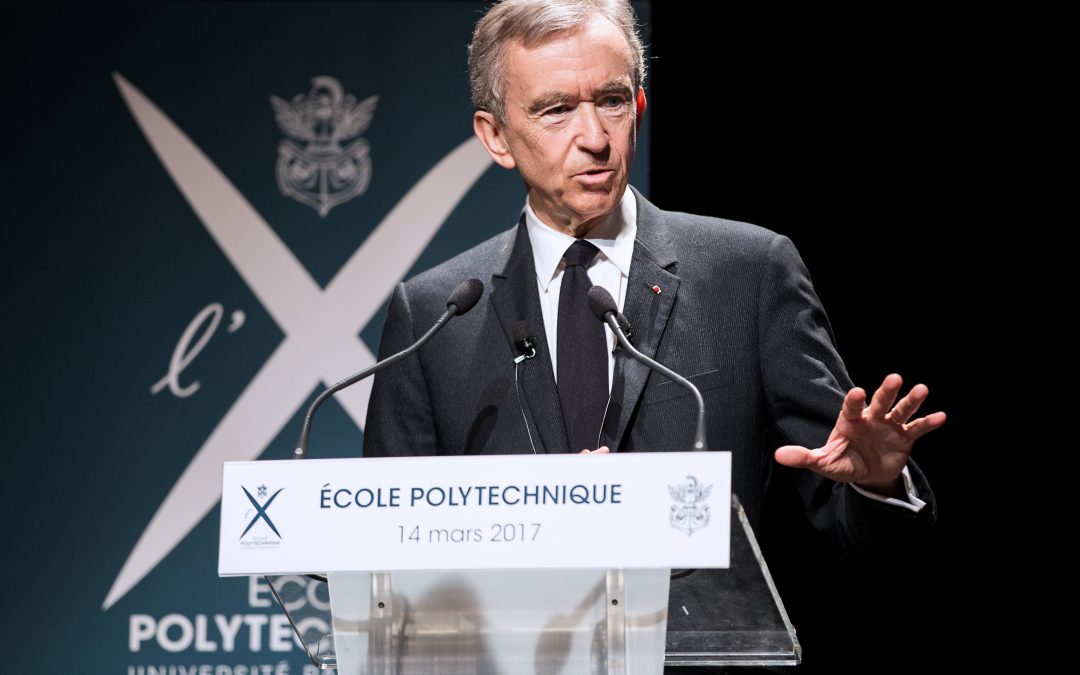 The CEO of LVMH began his career at 25 years of age in the family business. 45 years and 60 billion euros later, he is the richest man in Europe, On April 15 he announced a donation of 200 million to help rebuild Notre-Dame. If the figures are known, the man is more discreet. A look back at an exceptional course.

The family: its first strength

It is the story of a young man from the North who is not quite like the others, who has learned and who does not accept defeat, for whom work and success are Bernard Arnault’s guiding principle. The journey of the richest man in Europe began in 1949 in Croix, a town not far from Roubaix. Son of Marie-Joseph Savinel, of Auvergne origin, and Jean Arnault, an engineer from the École centrale and owner of a public works company, Bernard Arnault was involved in the business world from an early age. Raised by his grandmother Maminette, “Catholic-auvergnate” by his own admission, he learned to be thrifty. After studying in preparatory classes at the Lycée Faidherbe in Lille, he was eligible for Polytechnique, but could not attend the physical tests because of a broken arm. Nevertheless, although he was admitted to the École des Mines, he passed the competition again the following year and joined the prestigious X Corps in 1969. A first tour de force. At the age of 25, he joined Ferret-Savinel, the family business whose father became director in 1950 after Bernard Arnault’s maternal grandfather, Étienne Savinel, had founded it in 1926. Quickly, as usual, he took matters into his own hands and persuaded his father to sell the company’s construction branch in order to devote himself to a new activity. After a thorough restructuring, the latter followed his idea and now had a capital of 40 million francs. Ferret-Savinel became Férinel, a real estate development company, and Bernard Arnault embraced his destiny as an entrepreneur.

Luxury in the head

Confident and strong in his French success, he moved to the United States in 1981 to launch Ferinel Inc. The adventure in the land of Uncle Sam did not meet with the expected success: Bernard Arnault returned home in 1984… to begin the entrepreneurial saga and the immense success we know him. It was at that time that he turned to the luxury sector and bought Financière Agache-Willot with the support of Antoine Bernheim from the Lazard bank. This trust company then owns Boussac Saint Frère, a major textile player in the North, and the Christian Dior and Conforama brands, as well as the Le Bon Marché brand in Paris. At that time, the textile sector was experiencing great difficulties. In order to get the company back on its feet, the government granted nearly a billion francs in subsidies to the Boussac group between 1982 and 1985[1]. He undertook a major restructuring to retain only the Christian Dior brand and Le Bon Marché store, which would become the spearheads of his empire. A well-considered acquisition of 40 million francs, the bulk of the family fortune, which will make the French boss the proud owner of a company valued at eight billion francs in 1987. The same year, after a stock market crash, he became a shareholder of LVMH. Asserting himself as a strong man of the company, he acquired a 25% stake in 1988. Taking advantage of the differences between Alain Chevalier and Henri Racamier, the two co-presidents of the group, he led a takeover bid that would propel him to the head of the luxury giant in 1989. Since then, Bernard Arnault has consistently applied his principles of governance: decentralization of decision-making centers for each of the group’s brands to ensure that they retain their identity, or financing the growth of new brands through those already well established. The result is clear: the group’s value is multiplied by fifteen and turnover increases by more than 500%.

His goal: to win

Win, win, win, triumph. These words could have been associated with Genghis Khan or Attila Le Hun, but they also match the personality of the richest boss in France. For Bernard Arnault, it is not only a question of achieving financial success but also of leaving the competition on the starting line. And don’t tell him about Bill Gates or Steve Jobs, Microsoft or Apple, whom he considers to have “a much more ephemeral life cycle than that of companies that are often 100 years old”. Two companies in the technology sector, one of the few markets where we hear little about the Roubaix native. Perhaps because he was there before everyone else, with $30 million invested in Netflix…in 1999. Francis Bacon said that “knowledge is power”. Bernard Arnault had to consult his works.